On 15th January 2020, on the occasion of the international opening of the 1st Croatian EU Presidency and the establishment of the TESLA INNOVATION CENTER in Niagara Falls City, Academia Cravatica Institution and the Research and Development Center – Teslopolis, in honor of these two outstanding historic achievements of young Croatian Republic, together with the founders of the TIC and representatives of the Niagara Falls City, tied a red Croatian cravat, as a symbol of innovation, love, and unity, on the Nikola Tesla monument, made by Croatian sculptor Frano Krsinic, in 1976, when it was erected on the site of the world’s first hydroelectric plant.

The main goal of the Tesla Innovation Center, as the first in the history of the official association of American and Croatian institutions, is to return to the Niagara Falls City in the next 10 years the heritage, legacy and the spirit of innovation of Nikola Tesla, and to launch and implement a series of multidisciplinary projects and activities inspired by Nikola Tesla, and to build his own center at Niagara Falls City, as the first of its kind in the world.

Tesla’s AC system for the Niagara Falls hydroelectric plant, the first of its kind in the world, was set up in 1896, and it ushered in a new era in human civilization development, and Tesla’s dream of giving people the energy and power of the Niagara Falls, which he as a boy saw at the lithograph in the laboratory of the school in Karlovac, and researching more about the power of these waterfalls at the age of 17, stated:
„I was fascinated by a description of Niagara Falls I had perused, and pictured in my imagination a big wheel run by the Falls. I told my uncle that I would go to America and carry out this scheme. Thirty years later I saw my ideas carried out at Niagara and marveled at the unfathomable mystery of the mind.“

The cravat is an original Croatian product and a symbol of love, unity, and innovation, which was created in the 17th century by Croatian women and recognized at the French Court as an extraordinary fashion accessory under the name of the cravat. From France, the cravat went on its journey and development, generating not only one of the most fashionable accessories but also a whole range of symbols of the human desire for the creation, beauty, and refinement of the human being in his pursuit of a free and dignified life. Act of tying the tie of love to the monument to Nikola Tesla is built on one of the strongest legacies of the Niagara Falls City with a significant history in the abolition of slavery and the human pursuit of a free and dignified life, which at Niagara experienced its significant moments. However, Nikola Tesla dedicated his entire life and work, which he selflessly gave to humanity, to the freedom and dignity of human life., what he achieved with the realization of the Hydroelectric Power Plant on Niagara Falls. TESLA INNOVATION CENTER wants to continue that legacy, above all in the spirit of humanistic paradigms inspired by Tesla, its discoveries and technologies, which in our 21st century experiencing their technological realization! 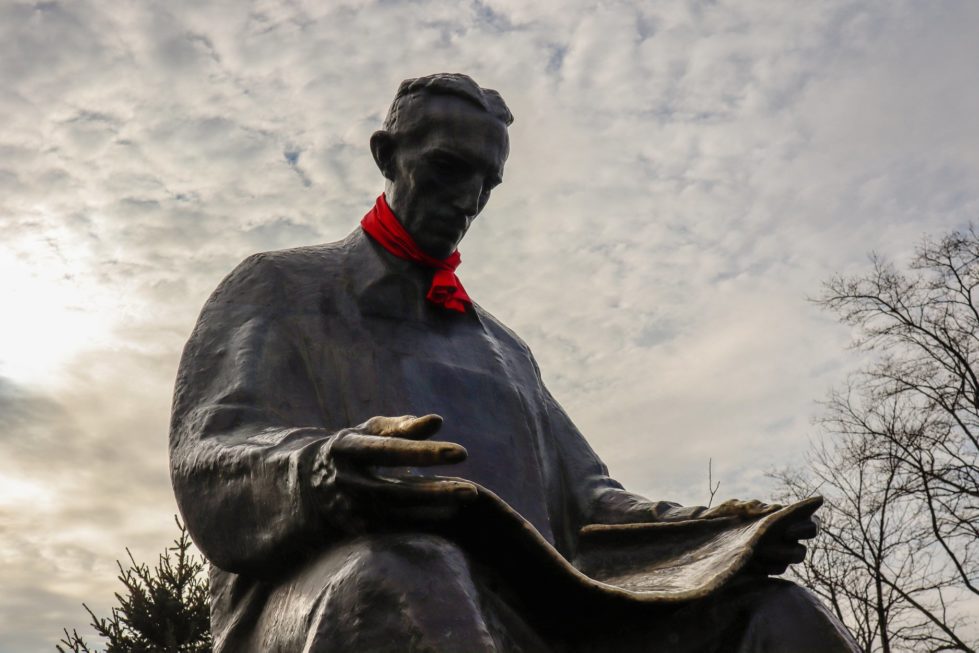