Academia Cravatica, as the main international and Croatian  institution dedicated to the study, preservation and promotion of the cravat as the cultural legacy of Croatia and the world, organized a series od special events marking the beginning of Croatian Presidency of the Council of EU. Beginning with January 1, Cravat Regiment (Kravat pukovnija), historical guard of honour, celebrated the first day of Croatian presidency with a special ceremony that took place on Saint Mark’s Square. The Mayor of the City of Zagreb, Milan Bandić joined the evnt as well. In the following days, Zagreb’s monuments and statues of famous Croatian men and women were decorated with large red ties, and for the first time, the statue of the First Croatian President dr. Franjo Tuđman as well. Together with the city of Zagreb, red ties were tied arounfd monuments in the city of Nova Gradiška for the very first time, the hometown of prof. Marijan Bušić, headmaster of the institution Academia Cravatica. 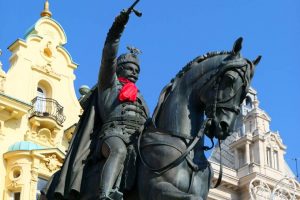 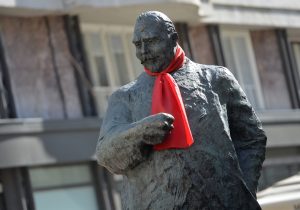 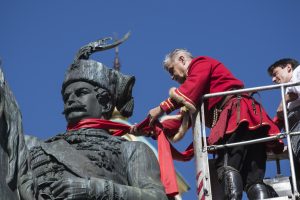