The Croatian origin of the cravat

During the Thirty Years War in the 17th century (1618-1648) Croatian soldiers were known everywhere as exceptional warriors, and they joined the French royal army. Alongside their military skills they were noted for one detail. They wore a kerchief tied around their necks. That kerchief, tied in a knot, quickly spread as a fashion accessory and took on an ethnic name, so the name of the nation – Cravate (Croates, Hrvati) – became the name of that item – the cravat.

The Croatian origins of the tie/cravat, founded on historical, ethnological and linguistic facts, are confirmed by domestic and world scholarly sources. For example, the French monograph Le Grande histoire de la cravate (author Francois Chaille, Flammarion Press, Paris, 1994) explains and specifically confirms the Croatian origins of the cravat. The Encyclopedia Britannica, under the noun “cravat” states that it derives from Crabate, Cravate, Croatian and that the appearance of the cravat dates from 1656. The Italian monograph Miss Cravatta, published in 1996 in Como, the best-known European and world centre for the production of cravats, undisputedly links the origin of the cravat undisputedly with the arrival of the Croatian cavalry at the time of Louis XIV etc. Questions (and the correct answer given) about the Croatian origin of the cravat are being asked increasingly on television quizzes in Japan, Turkey, Germany, Italy and other countries. The colorful kerchief of our soldiers in the Thirty Years War was taken from Croatian folk costumes. In Croatian traditional culture, there are as many as about forty men’s and twenty women’s folk costumes, both in Croatia and in other regions where Croats live – with a knotted kerchief as an essential part. The cravat is an “exceptional example of Croatian design of planetary value” (Boris Ljubičić) the only Croatian symbol that is universally known and appreciated, and at the same time recognizably Croatian. Croats gave the world the cravat and other nations have gone on perfecting it and made it into a universal symbol of dignity and male dress culture, a fashion accessory, which is increasingly interesting to women. The Americans conceived the cravat in three parts and so brought it to technical perfection. The most significant contributions to the perfection of the cravat came from the French, the English and other European nations. Therefore the cravat is a symbol of Europe. This may be seen in the already common practice of the European Union, where each presiding country, at the beginning of its term, presents itself with a specific cravat. “The example of the cravat shows that we have something to show to the world. Croatia has something to offer, it has evidence that we have made a contribution to world culture,” (Tomislav Šola).

The project – Croatia, the Homeland of the Cravat

At the end of the 20th century the cravat “returned” to its Croatian origins. Up to 1990 the extraordinary fact of the Croatian origins of the cravat was for the most part not an integral part of Croatia’s self-awareness, and the Croatian origins of the cravat were only known by a few scholars in the world. Today the cravat is “certainly the most recognizable Croatian souvenir and a kind of symbol… It is appropriate for the promotion of Croatia since it is already generally accepted in the world and it is at the same time both Croatia’s and the world’s. It is also an inexhaustible source of stories and inspiration. So through the story about Croats and the cravat the story of Croatia is also indirectly spread in the world’s media” (Božo Škoko). This major step forward began in the nineteen-nineties when the project, “Croatia, the Homeland of the Cravat” was launched, with visionary conviction that Croatia can present itself most worthily to the world precisely as the “Homeland of the Cravat”. As part of that project the Croata brand of cravat was launched along with the not-for-profit institution Academia Cravatica (AC), with the mission to promote the cravat as a special medium and part of the Croatian, European and world cultural heritage. Without the projects by AC the fact of the Croatian origins of the cravat would probably remain just another one of our unused historical opportunities. In 1990, the Croata brand was founded in Zagreb, with the visionary conviction of Marijan Bušić and Zlatko Penavić that Croatia could be presented more worthily to the world precisely as the “Homeland of the Cravat”. The new Croatian product – Croata cravats, became a Croatian souvenir recognized throughout the world, containing three marks of the Croatian national identity: the Croatian origins of the cravat, the national name Croata and motifs from the Croatian identity using the cravat as a medium. The cravat’s powerful potential as a means of communicating identity was recognized from the very outset, and since then Croata cravats have been used intensively in the tourist and diplomatic promotion of Croatia. The Croata brand places Croatia in the select company of the few countries who have their own original, and at the same time globally recognizable brand. This brand symbolically expresses the harmony between Croatian self-awareness and identity, on the one hand, and its openness to its European identity and global cultural values on the other. The cravat is not only a universal fashion detail, but at the same time, due to its symbolic power and aesthetic value, also a constant source of artistic inspiration. On that basis the strong promotion of Croatia as the Homeland of the Cravat is being developed through projects by the institution Academia Cravatica, which through the media is becoming well-known to the world public. The not-for-profit institution Academia Cravatica was founded eleven years ago (1997) with the mission of promoting the cravat as a special medium and part of the Croatian, European and world heritage. Amongst the many projects already run by AC, in terms of the exceptional response of the world public, the installation “A Cravat around the Arena”, created by Marijan Bušić, and the international exhibition “The Challenge of the Cravat” are outstanding. This exhibition, with a collection of about one hundred works by artists from fifteen countries (members of the jury: the academic Tonko Maroević, Ive Šimat Banov and Enes Quien), has been seen since 2004 in about ten countries around the world. In each country the exhibition visits, it includes works by local artists on the subject of the cravat, and so the exhibition’s collection is constantly growing.

The Message of Cravat Day

The installation “A Cravat around the Arena”, created by Marijan Bušić and staged on 18th October 2003 in Pula, was as a world scale spectacle, seen on world television by more than a billion people. It was assessed as “the most ambitious, most well-thought out concept and project to promote the Croatian identity” (Ive Šimat Banov). Through this installation, with the largest cravat in the world, the ancient and the contemporary eras were linked symbolically, and the red color of the cravat sent a message to the world of love and life together for all peoples and nations. “The cravat is communication”, says Marijan Bušić, interpreting the cravat not only as a symbol of Croatia, but also a symbol of Europe and a sign of the values of civilization of freedom and responsibility.With the Croata cravats and the AC projects, Croatia is not only presenting itself to the world but is communicating with it, thereby showing its desire for openness and an exchange of cultural values with other nations. This desire for openness to other cultures, despite its suffering in history, has always been a dominant characteristic of Croatia’s relationship with the world. The cravat is a universal symbol of dignity and dress culture, and its symbolic potential also holds other values. The vertical cravat symbolizes the human vertical – human dignity and self-awareness, a moment of ceremony and celebration, success and the business spirit… By its fluttering lightness, however, on the one hand, and the knot on the other, the cravat “binds together” freedom and responsibility. It encourages us to communicate more aware of our own dignity and the dignity of others, our freedom, but also our responsibility. Due to its huge symbolic power, the cravat has epochal importance for Croatia and the world After the worldwide success of the Cravat around the Arena installation, which pointed out the cravat as a special medium on a world scale, in 2008 AC launched the initiative to mark 18th October every year as Cravat Day in Croatia and the world. Since it originated from the Croats, the Croatian Parliament showed the cravat special honor, and in 2008 proclaimed 18th October Cravat Day in the Republic of Croatia The cravat as a sign of dignity and self-awareness has been worn for centuries by people around the planet. Cravat Day has been marked every year in Croatia since 2008, and is being increasingly accepted in other countries all around the world. Let us mark Cravat Day this year too, in 2010! Let us wear cravats with pride and joining with others, remind ourselves of the values it communicates: human dignity, the culture of civilization, the harmony of freedom and responsibility, important moments of celebration and solemnity, business success, a spirit of community between people and nations… With the cravat we send a message of true, lasting values, as a good foundation for the future. A red cravat has been made specially to mark Cravat Day, from cloth used to make the “Cravat Around the Arena” – the art installation by Marijan Bušić from 18th October 2003. 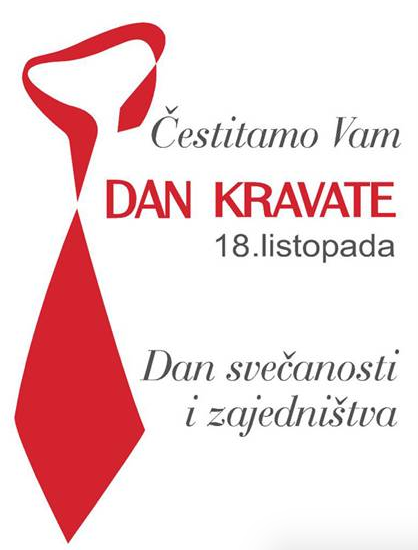