Although it has always been thought that the French King Louis XIV was the first to wear something resembling a cravat, or a scarf as its predecessor, on a portrait dating from the end of the 17th century, it is now clear that the oldest portrait of someone wearing a cravat was painted in a Croatian city. This was of course Dubrovnik. That is to say, it was recently discovered that the famous Dubrovnik poet, Ivan Dživo Gundulič, on a portrait dating from 1622 and kept in the Rector’s Palace, is wearing a scarf around his neck, tied like a cravat. This insight gives a new emphasis to the character of the great man of Dubrovnik, Gundulić, but the new facts also shed light once more on the origins of the cravat.

This all means in fact that the cravat was worn in Dubrovnik as long as 55 years before it was worn in France, and there is real evidence to support this fact. Although this portrait of Gundulić has been on show in the Rector’s Palace for many years, it is interesting that it has never been noticed before now that the poet is not wearing a normal scarf, but precisely a cravat. “Dubrovnik is one of the greatest Croatian brands, just like the cravat, and with this discovery these two brands now complement one another even more” it was pointed out, amongst other things, at the press conference in the atrium of the Dubrovnik Sponza Palace, on the occasion of this discovery, by Mirta Hansal, a public relations officer from “Academia Cravatica”. Moreover, Dubrovnik and the cravat are each in their own way a symbol of the centuries long story 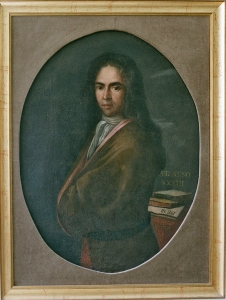 As well as this exclusive, it was mentioned in Dubrovnik that a 17th century map was recently discovered in the area of Slavonski Brod, on which it is visible that a fortress there is called Cravatten Statt. “The map was drawn by the Dutch cartographer Nikola Sparr de Bensdorf, and in an attempt to record as precisely as possible the layout of military forces in the Habsburg Monarchy, facing the Ottoman Empire, both cavalry and infantry, as well as command posts, as part of the fortifications for the period from 10th to 12th October 1697, he added a number of toponyms. He wrote amongst other things the name of the fortress as Cravatten Statt. This form of archaic German language indicated a Croatian castle, whilst today we find it in various linguistic forms as the word for a cravat. From all this it is indisputable that the cravat originates from the Croats”, it was pointed out in the Sponza Palace by the art historian and curator of the Museum of the Cravat, which is in the process of being established, Nikola Albaneže.

However, this certainly is not the end of the new historical and other discoveries and interesting facts related to the origins of the cravat, nor the always unique projects run by Academia Cravatica, as the true promoter of the Croata brand, thanks to which the cravat is becoming increasingly recognized throughout the world as one of the most original Croatian brands.